Be the first to review this product
As low as CA$49.99
In stock
SKU
AGWARFARE40
Add to Wish List
Share: Email
Skip to the end of the images gallery 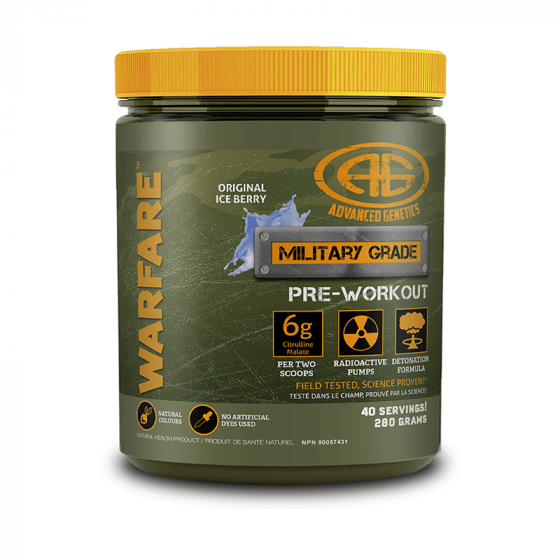 Are you just going to the gym to train…or are you going to wage WAR?! In order to force muscle growth, you have to use sufficient intensity. Warfare™ pre-workout is designed to deliver maximum energy and focus while at the same time creating REAL nitric oxide pumps and REAL muscle growth. You’ve never experienced a full force pre-workout like this!

WARFARE (The Powerful Preworkout Supplement) WILL:

When do I take WARFARE™?
Powder: For maximum results, on training days we suggest 1-2 scoops 30 minutes before training.

Can I stack Warfare?
You can combine Warfare with GP3 EVO and Battle Juice for maximum effectiveness.

Do I have to take Warfare on non-workout days?
No.

Do I need to cycle Warfare?
It’s always a good idea to cycle stimulants.  You can cycle with F-10 or Flash Bang.

Is there anything illegal in Warfare?
It may feel like it, but Warfare has been granted an NPN (natural product number) from Health Canada. Always check with your federation’s list of banned substances if you compete in tested events.

What makes Warfare better than other pre-workouts?
Most pre-workouts are stimulant based.  Occasionally they will also deliver a good nitric oxide system (but usually are extremely under dosed!). Warfare is the first to deliver real ingredients with full dosages to truly deliver a great stim and nitric oxide effect…and it actually BUILDS MUSCLE! Warfare is a powerful preworkout supplement for athletes.

Was Warfare originally blue raspberry?
Yes, it was. However the natural coloring we used reacted with other ingredients in the powder and turned the color of the drink green. We removed the coloring completely and renamed it. It is the exact same flavor and formula as the original…thus the name “Original Ice Berry”.

Ingredients & Directions of Use
We Found Other Products you Might like!
Check items to add to the cart or
Write a review