Be the first to review this product
CA$49.99
In stock
SKU
NU-950
Add to Wish List
Share: Email
Skip to the end of the images gallery 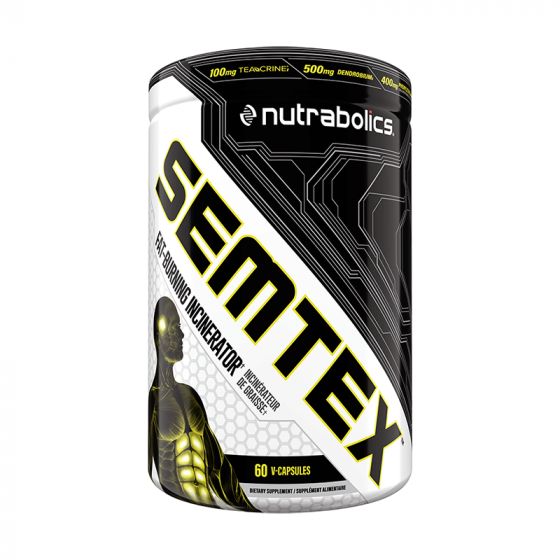 Skip to the beginning of the images gallery
Description

THE SCIENCE BEHIND SEMTEX

Teacrine® is a potent nootropic that has molecular similarities to caffeine, however, it's subtle, yet significant differences help athletes and professionals take their game to the next level without the jitters, crash or habituation of cheap caffeine products. In several studies with human subjects, researchers found that TeaCrine® significantly enhanced energy levels while avoiding a fatigued crash. Unlike caffeine or other cheap stimulants, the energy boosting effects of TeaCrine ® have been shown to last for hours! When SEMTEX's™ 200mg maximum legal dose of Teacrine® is combined with key thermogenic and energy optimizers it creates a multi-phase, synergistic effect for the ultimate fat-burning firestorm.

400mg Phenylethlamine - Increases focus, concentration and enhances mood. This active ingredient helps to increase the process of lipolysis through stimulating the release of Catecholamine.

300 mg Caffeine Anhydrous – Has thermogenic properties that aid in the burning of fats. The presence of caffeine in the body leads to the increase of epinephrine and norepinephrine. These two hormones signal the body to dissolve fat so that it can be available as an energy source.

300mg Theobromine – This active is a mild stimulant and diuretic which can aid in increasing insulin sensitivity. Theobromine also acts as a mood enhancer.

Ingredients & Directions of Use
Write a review