The store will not work correctly in the case when cookies are disabled.
Menu
Account
Skip to the end of the images gallery 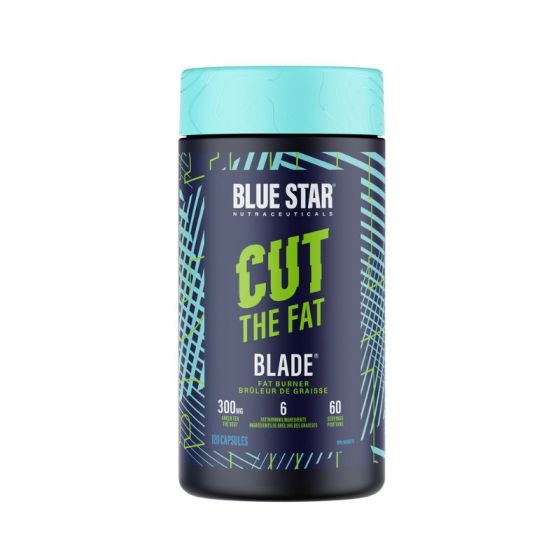 Skip to the beginning of the images gallery

Blue Star Nutraceuticals Blade isn't' just the newest fat burner designed specifically for men it's also the strongest.∗ With more than triple the strength of the original award-winning formula, Blade once again shatters the preconceived notions about effective fat burning for men.∗ You see, it's not just stronger.∗ It also starts working faster.∗ And its effects last even longer.∗ Finally, a fat burner that lets you focus on absolutely anything other than burning fat leave that to Blade.

HUMAN TESTING. MADE BY MAN. TESTED ON MEN.

The key ingredients in Blade were clinically tested on humans.∗ Cut-rate supplement companies pull their claims from rodent-based research - this is unethical, inaccurate, and potentially dangerous. Human research costs more, takes longer, and requires a significantly more qualified research team. But it's also the only way you can be sure that the claims on the label are the results you should expect - and that's why Blue Star Nutraceuticals does it.∗

NOTHING BUT THE BEST. AT LEAST ACCORDING TO SCIENCE.

Other products offer confusing directions "2-4 servings daily," for example. This intentionally misleading technique is often used in order to meet their outrageous claims. Blade is formulated with you in mind. There are no fillers. There is no fluff. Everything you need has been packed into one serving. Others might call it "concentrated," but we just call it complete.

The first and most important step in an effective fat-burning process is to attack the fat cells and release them into the bloodstream as free fatty acids. This step lipolysis is an ongoing occurrence, but only at a limited rate. Luckily, that rate can be increased, and one way to do that is with the presence of norepinephrine. Only Blade produces a long-lasting, concentrated presence of norepinephrine, which means your first and most-important step in the fat-burning process is already taken care of for you.∗

SHOW FAT WHERE TO GO. THEN MAKE SURE IT NEVER COMES BACK.

Now that your excess fat is gone, let Blade help prevent new fat from showing up.∗ "Adipogenesis" is the fancy word for fat cell development. The key to quality fatloss is adipogenesis suppression. And that's exactly what Blade does∗. By inhibiting the enzymes that allow fat to accumulate, Blade significantly restricts your body's willingness to form new fat cells.∗

THERE IS NO SUBSTITUTE FOR HARD WORK. EXCEPT BLADE.

The good news is, even at this very moment, you're already burning fat. It's a process called thermogenesis and without it, "gaining 15 pounds over Thanksgiving" wouldn't just be an expression. The problem is, thermogenesis works differently for everyone. And even for the very few, very lucky, one percent of the one percent, the process is still pretty slow and ineffective. Thermogenesis is controlled by your basal metabolic rate. You've likely heard it referred to as your "metabolism." The higher your basal metabolic rate, the more fat you burn without having to work for it. Blade significantly increases thermogenesis so that you burn fat without even thinking about it, allowing you to focus on, well, absolutely anything else.∗

TWO STEPS FORWARD. NO STEPS BACK.

Burning fat is just about the greatest feeling in the world. Putting fat back on is the worst. Blade thwarts the likelihood of a rebound by actively keeping your appetite at bay.∗ And with your cravings in check, your diet will go back to being something you have, not something you're on.

XD DELIVERY TECHONOLOGY MAKE THE MOST OF IT.

Blade uses Blue Star Nutraceuticals XD Delivery Technology to ensure the maximum bioavailability of every serving.∗ By dramatically decelerating the intestinal transit rate, XD Delivery Technology prolongs exposure time and increases absorption.∗ The result? You benefit fully from absolutely every bit of Blade, right down to the very last microgram.∗

Ingredients & Directions of Use
Write a Review
We Found Other Products you Might like!
Check items to add to the cart or